The wonderful luck and visit we had at Horn’s Creek Baptist Church was going to be a hard act to follow. It was getting later in the afternoon, and we had quite a ways to go to get home. Anything from this point on was going to be an afterthought.

But sometimes those afterthoughts can be worthwhile. First we went and paid homage to the original home of our alma mater. Furman University got its start in Edgefield in 1826.

I knew from my trip last year that Willowbrook Cemetery was just around the corner. Initially Alan wasn’t too interested. He only knew it as the final resting place of good ol’ Strom Thurmond, of whom he wasn’t a fan. I convinced him there was more to it.

Last time I visited I describe all the famous people planted here, like Thurmond, Preston Brooks, former governors, and others. I’m not going to repeat those comments. Rather, I want to focus on the artwork and other oddities that we found.

The iron fencing was absolutely amazing. Some of it had been damaged (or stolen) over time, but there were some incredible examples of craftsmanship there. There were the willow designs we had seen at Horn’s Creek, but other patterns as well.

Even the text was elaborate. There was some of the raised lettering we had seen at Lower Long Cane ARP. There were also a few stones where the text was placed on a curved, rather than flat surface. I’m sure that must have been harder to carve than just a flat surface.

The detailed stone carving, though, was what was really amazing. 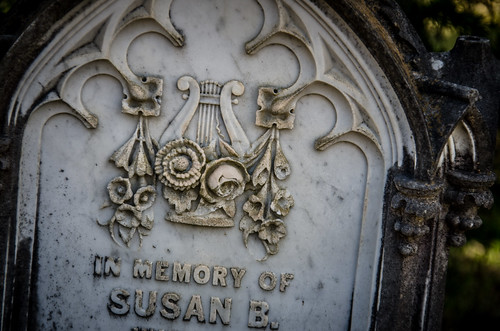 One bas relief carving on the tomb of Loulie Bryan was quite evocative. At first I thought it was one of those “parlor portraits” showing her combing her hair. Close inspection showed that she had a cross on her shoulder. The willow motif is in the background.

Her body to dust returns, but she leaves the fragrance of a Christian spirit to lure loved ones to the land of light.

There were some other oddities. One headstone for a missionary to China consisted of a rough stone brought back from that country.

Most unusual, though, was an apparent trap door made of iron at the end of one family plot.

“According to local legend, he is buried sitting in a chair behind glass. Under this door, there is supposed to be an archway and a tunnel that leads to him.”

Shortly after Alan and I made our trip someone posted an article to Facebook from The State Newspaper. The article was about several unusual headstones in the cemetery, and quoted cemetery historian Tonya Guy. Apparently this trap door had been part of the grave of Dr. James Adam DeVore. Dr. DeVore was eccentric, and insisted on being buried sitting upright behind glass. The trap door supposedly had stairs that lead down to his tomb so his family could visit. Guy states that a pastor of the next door Baptist Church didn’t like people going down there, so he had it filled in sometime in the 1960s. Guy also mentions that a large stone cross has fallen on top of DeVore’s headstone. Alan and I saw the fallen cross, but didn’t take a photo of it.

I had forgotten my hat. For someone follicly challenged as I, a covering is essential to prevent sunburn on the top of my head. We had spent too much time out at Willowbrook, and the top of my head was starting to bake, so it was time to wrap things up.

We had seen lots of cemeteries on this trip – Lower Long Cane ARP, Wideman, Shiloh AME, Plum Branch First Baptist, Horn’s Creek Baptist, and Willowbrook. Six cemeteries was quite a bit for a single day’s ramble, and we still had one surprise in store.

On Highway 25 in between Edgefield and Greenwood just north of Sheppard’s Corner one encounters two sets of brick columns, north and south, obviously bounding a bit of property. Equidistant between these is another matching set of columns to the east with the name “Matthews”, and a road leading between them. These have always intrigued me, but the road has been overgrown to the point that I couldn’t see what’s down there, and I’ve always been in route to somewhere else. This time there had been clear-cutting on the acreage around the plot, and we could see that the road lead to a family cemetery. We decided to check it out.

There were about a dozen headstones at the east end of circular drive. The largest stone must have been for one of the patriarchs, one Simeon Peter Matthews, who died in 1915. However, this wasn’t the first – there were some older stones. Other family members were distributed around. There was also one of the lectern-styled headstones Alan and I had seen at other places.

The weird thing was that some small stones had been placed on some of the graves, and coins had been left on the lectern stone.

According to the blog A Grave Interest, the placing of stones was originally a Jewish tradition, but has become more common.

It is also a Jewish custom to place a stone or pebble on a headstone to indicate that you have visited the grave and to indicate respect for the deceased. Adding a stone was also seen as taking part in the Mitzvah of Matzevah or the ‘setting of stone.’

Today, leaving a stone of remembrance is viewed more as a way of continuing this tradition of commemoration. The more stones found at a grave, the more the deceased has been visited and remembered by others. An example would be the scene in Schindler’s List when the people that Oskar Schindler saved visit his grave and honor him by placing stones upon it.

I had seen coins left on headstones. I knew that the origin was from the practice of leaving coins to pay the ferryman, Charon, for passage to the afterlife. Now both coins and stones are used to indicate that someone had visited.

It had been quite a full day, and I posted nearly 300 photographs from the trip. You can view those either in this album or below:

Here’s a map showing all of the locations that we visited on this epic ramble.

3 thoughts on “Modoc Cemetery Ramble – Part 4, Willowbrook and a Bonus”